Bob Dylan and the genius of context

When I woke up this morning, I was delighted to learn Bob Dylan was awarded the Nobel Prize for Literature for “having created new poetic expressions within the great American song tradition.” For those of us in Minnesota, still mourning the loss of Prince, this was a welcomed surprise that feels healing, both culturally and spiritually.

But not this time. It took them until just before 11am to make the announcement. And, it was distant, if not cautious:

Why such an innocuous statement this time? Well, history records that Dylan dropped out after just a few semesters; he was successful without the University.

Don’t get me wrong: I love the University of Minnesota – or, the “U” as we affectionately call it. I got my Ph.D. there, and started off my academic career at the Twin Cities campus. But I think there is a crucial lesson to be learned:

Dylan’s career started not at the University, but across the street in the Dinkytown district of Minneapolis. Dinkytown was eclectic: a zone for free thought, open expression, independent businesses, and a food and bar scene that catered to students, faculty, and staff. The University attracted people in, but it was the music scene of the adjoining neighborhood that helped to propel him and get a start in his career.

After a year at the “U,” he moved to Greenwich Village in New York, and the rest is history.

And the University remains. It’s churned out a few Nobel laureates along the way, but I fear that we will see fewer creatives, like Dylan, emerge. The reason is simple: the context is being destroyed.

The University of Minnesota, like nearly every other institution, has learned that higher education is a big business. This extends not just to research and teaching, but also to the University’s presence in the community. It comes as no surprise that the “U” has been a major player in the redevelopment of Dinkytown. Small, older buildings that once housed its creative scene are being replaced with monotonous, monolithic apartment buildings, chain stores, and generic fast food options. Freewheeling politics, art, and other cultural expressions are being replaced by unimaginative configurations of concrete, steel, and glass.

The context for fostering genius is vanishing. I’m sure many more Nobel laureates connected with our beloved “U” will be announced in the coming years, but there will be no other Bob Dylan emerging from the University without an interface for creativity.

A conversation and workshop with the KaosPilots and Knowmads

For those of us in the Minneapolis area, I’m pleased to share news that the KaosPilots and Knowmads will visit with the University of Minnesota for a free event on redesigning university education.

Following on the activities of the College of Design’s Design Intersections symposium (http://intersections.design.umn.edu/), the University of Minnesota community is invited to join in a FREE follow-up workshop, co-sponsored by the Department of Organizational Leadership, Policy, and Development and the Jandris Center for Innovation in Higher Education:

Rethinking Teaching and Learning at the University of Minnesota: A Conversation and Workshop with The KaosPilots and Knowmads.

Registration will be limited to 50.
REGISTER FOR THE FREE WORKSHOP
Join us for a FREE co-creation event at the University of Minnesota featuring global creatives from the KaosPilots (Aarhus, Denmark) and Knowmads (Amsterdam, The Netherlands) —innovative schools focused on applied creative and design thinking, business, and social entrepreneurship.
We will discuss the future of education and what it means for the University.
We welcome the University community and others interested in education for building a creative and innovative Minnesota.

John Moravec and Cristóbal Cobo engage in a one-on-one dialogue on new dimensions for thinking about learning. In this conversation, they share some of the most important ideas developed in the book, Aprendizaje Invisible (Invisible Learning), to be released next week. More information is available at www.invisiblelearning.com.

Next Horizon Forum roundtable: Education and the Technological Singularity

An invitation to the next Horizon Forum meeting at the University of Minnesota:

Education and the Technological Singularity

At the next Horizon Forum, you are invited to join the discussion, moderated by Arthur Harkins and John Moravec, with special guests, as we probe into the deep future of education.

What does this mean for schools today? Kurzweil’s vision of the Singularity is criticized for being technologically deterministic. But, are there relevant social and cultural aspects related to the human experience? At the Horizon Forum’s next open roundtable, will explore what changes could take place in our schools and learning institutions within the next 35 years as technology transforms the human mind and human potential… and what we can start doing today!

Lunch and validated parking will be provided. Please RSVP your attendance by 10am on January 25 to Carole MacLean at cmaclean@umn.edu or call 612-625-5060.

The Horizon Forum is sponsored by the Preparation to Practice Group in the College of Education and Human Development at the University of Minnesota. For for information about the Horizon Forum, contact John Moravec at moravec@umn.edu or call 612-625-3517.

Note: Education Futures is on a reduced publication schedule for the summer, and will return with its regular schedule in mid-August.

Seminar at Oxford: Challenge for Education in the 21st Century 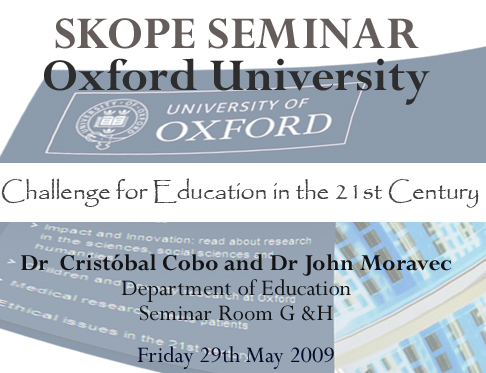 The e-competencies conference is over –and, by all measures, it seems to be a resounding success! Many, many thanks go to Cristóbal Cobo and Jutta Treviranus for the co-organization of the event.

I am particularly grateful for our amazing participants. A few of their presentations are already online:

Also, we had some great real-time presentations. Cristóbal Cobo posted many of our slide sets at Issuu:

Finally, I wish to express my gratitude to the amazing support team at FLACSO-México that made the conference possible, especially Ana Karla Romeu, Aarón Láscarez, Javier Cruz, Edgar Gutierrez, Déborah Monroy and Marduk Pérez de Lara. Thank you all!

On top of all these thank you’s, additional thanks goes to Cristóbal Cobo for compiling above lists of presentations.

The FLACSO-México, University of Minnesota, and University of Toronto collaborative conference/seminar on E-competencies for the 21st and 22nd centuries will take place this Friday.  We have a tremendous list of speakers, and if you are not able to participate in person, we hope that you will be able to join us virtually.  The event will be broadcast live via two streams:

Read on for the event program:

The preliminary program for the upcoming e-competencies event on October 31 in Mexico City is now available! Although this is likely to change a lot, I want to share it immediately to highlight the excellent minds (from nine countries) that will be joining us!

This is just a reminder that the submission deadline to participate in this FLACSO-México, University of Minnesota and University of Toronto co-organized event on e-competencies and e-skills is coming up this Friday (September 26).  Participants can join in person or virtually, and need not present to join the event (although presentations are encouraged!). We already have many outstanding proposals from throughout the Americas (and beyond), and welcome a few more!  Feel free to contact me with questions, etc., at moravec@umn.edu.