Slides from this morning's MACTA presentation

From this morning’s MACTA keynote address: Co-constructing Career and Technical Education for the 21st Century

Career and Technical Education is poised at the inflection point of a technological and social change process identified as the “J” Curve. Just like the letter J, the “J” Curve describes a sharp upward turn in the exponentially accelerating rate of change. The effects of the “J” Curve will be felt -indeed, are already being felt- by every institution, company, government, and school in all societies. This presentation centers on the leadership that can be exerted by Career and Technical Education in the context of the “J” Curve’s increasing impacts.

To view the slides in a larger format, click here.

Six scenarios for the Technological Singularity

Two articles related to the Singularity Summit have appeared on preparing for the Technological Singularity:

In this work, along with my colleagues John Smart and Jerry Paffendorf, I sketch out four scenarios of how a combination of forces driving the development of immersive, richly connected information technologies may play out over the next decade. But what has struck me more recently about the Roadmap scenarios is that the four worlds could also represent four pathways to a Singularity. Not just in terms of the technologies, but — more importantly — in terms of the social and cultural choices we make while building those technologies.

The scenarios explored are:

Read more at Open the Future…

Second, Bryan Gardiner writes on the Wired blog that Peter Thiel, co-founder of PayPal, multi-millionaire Facebook backer, and the president of Clarium Capital Management, a global macro hedge fund, is devising a Singularity-aware investment strategy based on two, polarized scenarios in a near-future world where machines will become smarter than humans:

Regardless of the two scenarios, Gardiner points out that the volatile booms and busts over recent years are indicative of the market’s attempts to align itself with near-Singularity transformations:

In essence, he argues that each of these booms represent different bets on the singularity, or at least on various things that are proxies for it, like globalization. What’s more, we’ve been seeing them now for over 30 years.

The markets are catching on to accelerating change. Why not bet on the Singularity in our schools as well?

Top ten signs the "Singularity is near"

As we stated in yesterday’s top ten list, human-surpassing intelligence will guarantee that the future is far more different than we can imagine. Our second top ten list plays off ideas from Ray Kurzweil’s The Singularity is near, Hans Moravec’s Mind children and Robot, and the work of Vernor Vinge. Onward Singularitarians!

Top ten global trends that force us to rethink education

We open our ten days of top ten lists with a list of global trends that force us to rethink education. What does the future hold for today’s students in the 21st Century? In a future driven by globalization, knowledge, innovation, and accelerating change, education will need to be re-missioned to meet new needs:

Education Futures is about to transform and grow a bit, with a refocus on content, an additional editorial blogger and the introduction of guest bloggers. Expect big changes starting in July.

A ten-day kickoff for Education Futures’ new direction is coming up! Beginning Monday, top ten lists of ideas and resources will be posted each weekday that help us to rethink education in a New Paradigm of global change as we progress toward the 22nd Century. Global trends, the Technological Singularity, Leapfrogging, and other ideas and resources for building successful education futures will be shared.

See you on Monday!

SIAI is a not-for-profit research institute in Palo Alto, California, with three major goals: furthering the nascent science of safe, beneficial advanced artificial intelligence (self-improving systems) through research and development, research fellowships, research grants, and science education; furthering the understanding of its implications to society through the AI Impact Initiative and annual Singularity Summit; and furthering education among students to foster scientific research.

Reason Magazine published a rather interesting interview with Vernor Vinge, touching on issues that interest libertarians. In regard to government control, or efforts to slow the Technological Singularity, he states:

There is a national interest, and not just in America, in providing the illusion of freedom for the millions of people who need to be happy and creative to make the economy go. Those people are more diverse and distributed and resourceful and even coordinated than any government.

That’s a power we already have in free markets. Computer networks, supporting data and social networks, give this trend an enormous boost. In the end that illusion of freedom may have to be more like the real thing than any society has ever achieved in the past, something that could satisfy a new kind of populism, a populism powered by deep knowledge, self-interest so broad as to reasonably be called tolerance, and an automatic, preternatural vigilance.

From the “silly but good” department…

My 12 March 2007 presentation for FLACSO Mexico is now available at SlideShare: 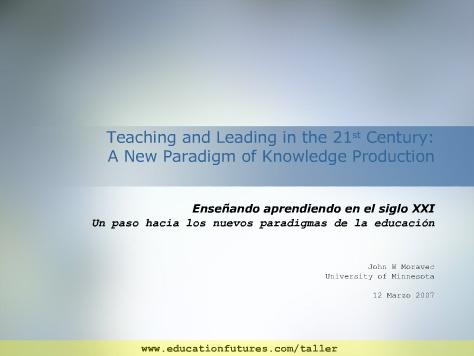 ZDNet is running a blog story on the Singularity Summit at Stanford University. Particular attention in the article is focused on the debate between Ray Kurzweil and Douglas Hofstader on utopian versus dystopian futures:

Kurzweil acknowledged that Singularity could lead to an unappealing or cataclysmic future, but he believes his vision will have a soft landing. If the technologies were considered too dangerous, it would require a totalitarian society, would deprive people of the benefits of technology innovation and drive it underground. In his view, narrow relinquishment of dangerous information and investing in defenses is a morely likely, or hopeful, outcome.

expressed the ‘human’ concern of uploading ourselves into cyberspace, becoming software entities inside of computing hardware as our destiny. “If that’s the case how will the entire world, enviroment in which we live be modeled,” he asked. “What does it mean for humans to survive in cyberspace, and what is the core of a person. It’s not clear what a human being would be in such an environment.”