Education Futures contributors Arthur Harkins and John Moravec have been chosen as “highly commended” award winners at the Emerald Literati Network Awards for Excellence 2012 for their article entitled Systemic Approaches to Knowledge Development and Application published in the journal, On the Horizon.

To highlight the paper further, the publisher has made the article free for download for the next three months. In the piece, Harkins and Moravec introduce systemic approaches to knowledge development and application — that is, a framework which provides a systems-language descriptive means for understanding and engaging in an expanding ecology of knowledge development options. We call this “MET” : mechanical (conservatively repetitive), evolutionary (self-organizing), and teleogenic (purposively creative). Many of the characteristics of the MET framework are summarized in this table (click to enlarge): 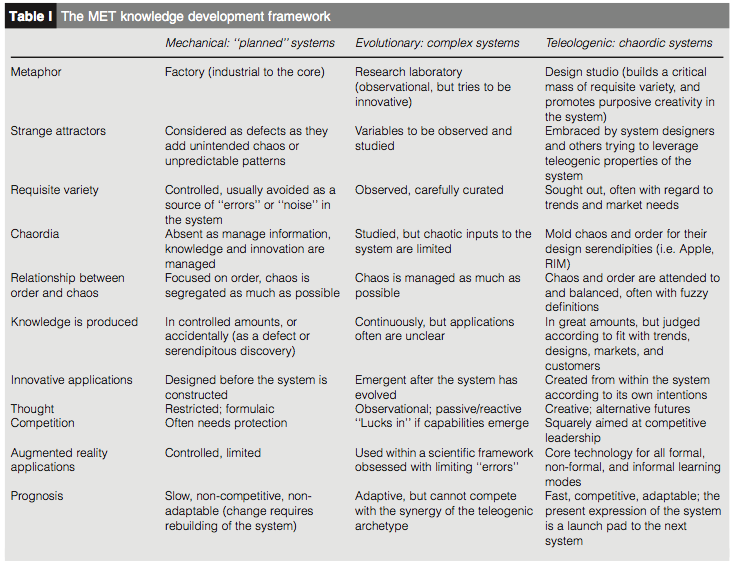 American preK-12 schooling systems may be primarily mechanical, but some of their students may learn at home or on the internet in parallel evolutionary and teleological ways. The question is how such students can survive the conservative impacts of the outdated majority culture mechanical model, especially if it is delivered in unsophisticated and undemanding ways. They may have to depend upon self-education, the help of their parents, and luck to avoid becoming the casualties of a declining knowledge-resistant culture. We believe that the MET archetypes, buttressed by [augmented reality], can help such people, beginning immediately.

A systemic approach to knowledge development and application

In the current issue of On the Horizon, Arthur Harkins and I introduce systemic approaches to knowledge development and application — that is, a framework which provides a systems-language descriptive means for understanding and engaging in an expanding ecology of knowledge development options. We call this “MET” : mechanical (conservatively repetitive), evolutionary (self-organizing), and teleogenic (purposively creative). Many of the characteristics of the MET framework are summarized in this table (click to enlarge): 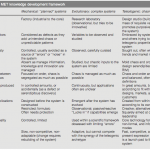 American preK-12 schooling systems may be primarily mechanical, but some of their students may learn at home or on the internet in parallel evolutionary and teleological ways. The question is how such students can survive the conservative impacts of the outdated majority culture mechanical model, especially if it is delivered in unsophisticated and undemanding ways. They may have to depend upon self-education, the help of their parents, and luck to avoid becoming the casualties of a declining knowledge-resistant culture. We believe that the MET archetypes, buttressed by [augmented reality], can help such people, beginning immediately.

Continue on to the full article in OTH…

Invisible Learning to be published in early 2011 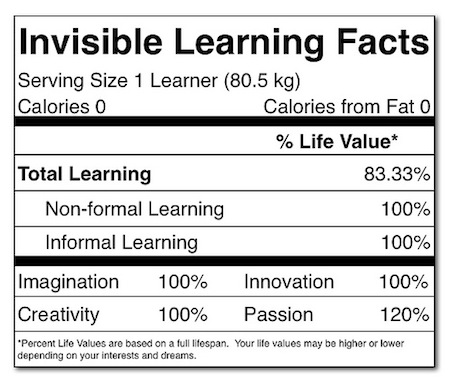 About a year ago, Cristóbal Cobo and I announced a research project called Invisible Learning. After many months of work, collecting experiences, researching literature, interviews, and exchanges with experts (and –above all– many hours of writing), we can announce that in 2011 the Invisible Learning book will be a reality (in print and digital formats).

Details about the upcoming book, Invisible Learning: Toward a new ecology of education, are available at http://invisiblelearning.com — and, because we will first publish in Spanish, the website is (for now) in Spanish. We will roll out an English edition of the website and book later in 2011.

The project has exceeded all of our expectations. Not only in terms of interest (over 15,000 references in Google, 7,500 TEDx video playbacks in Spanish and many as well in English), but in the scope of contributions from universities and researchers in the United States, Spain, Chile, Argentina, Uruguay, Mexico, United Kingdom, Netherlands and Finland. We view this as a global commitment (Western, at least) to take a transnational perspective on education at all levels.

The ingredients from these sources are combined in this work to build a large map of ideas, proposals, experiences, tools, methodologies, and research frameworks that seek to make visible those invisible components that lie behind learning. This text seeks out new questions about learning for the upcoming decades.

Although the text has a critical perspective, resulting from the analysis of the shortcomings of educational systems, it also seeks to highlight innovative and transformative initiative that are launching in various corners of the globe.

We do not offer magical fixes for the problems identified, but we assemble the pieces of a conceptual puzzle, constructed from: Society 3.0; lifelong learning; the use of technologies outside of the classroom; soft skills; methodologies for building education futures; serendipic discovery; the hybridization between formal and informal learning; skills for innovation; edupunk and edupop; expanded education; digital maturity; Knowmads and knowledge agents; plus many new literacies relevant to the times in which we live.

We believe that the vested interest and the support provided by dozens of collaborators and institutions such as the Laboratori de Mitjans Interactus (LMI) at the University of Barcelona (publisher) are a living demonstration of the deep interest that exists for building a better education for tomorrow. Hugo Pardo, editor and the publisher’s tireless engine of this book provides some insight on his blog. We will write more about this project and its “added values” as it approaches publication. Stay tuned!

Toward a smarter planet

Last month, IBM took out a two-page advertisement in the Wall Street Journal that touted their vision for a smarter planet. They believe:

The world continues to get “smaller” and “flatter.” But we see now that being connected isn’t enough. Fortunately, something else is happening that holds new potential: the planet is becoming smarter.

That is, intelligence is being infused into the way the world literally works—into the systems, processes and infrastructure that enable physical goods to be developed, manufactured, bought and sold. That allow services to be delivered. That facilitate the movement of everything from money and oil to water and electrons. And that help billions of people work and live.

Furthermore, they write that the smarter planet is powered by three drivers:

What does this mean for the futures of our various institutions?  For our hopes in quality of life?  IBM examines these questions in their blog, Building a Smarter Planet. They don’t provide answers, but they get the conversation going.

With the world becoming increasingly instrumented, interconnected, and intelligent, what new opportunities and challenges are presented to education and human capital development systems?

Bigger or more complicated is not always better. Scott Anthony wrote an article in Harvard Business on the perils of “too much innovation.” He writes on over-engineering innovations:

There is something about human nature that restlessly seeks to improve things. But instead of asking “Can we?” innovate to improve what exists and create what doesn’t, companies need to ask “Should we?”

Overshooting happens in just about every industry. It tends to start in the least demanding tiers of the market and creep up to more demanding tiers. Overshooting creates conditions that encourage the formation of disruptive attackers who change the game through simplicity or low prices.

Simplifications can be innovations, too. The success of the iPod and iPhone can be credited to their simplistic designs. Likewise, the minimalism movement transformed the post-WWII design world. Education systems, in the meantime, have transformed into highly-engineered organisms.

Can simple work in education, too?

Driven by a New Paradigm of globalization, rise of the knowledge society and accelerating change, the education sector is in dire need of innovative transformations. Rather than over-engineering solutions to the challenges we face in education, are there simple, yet seemingly elegant, pathways to successful futures?

Games in the Classroom 7–game mechanics for creating learning 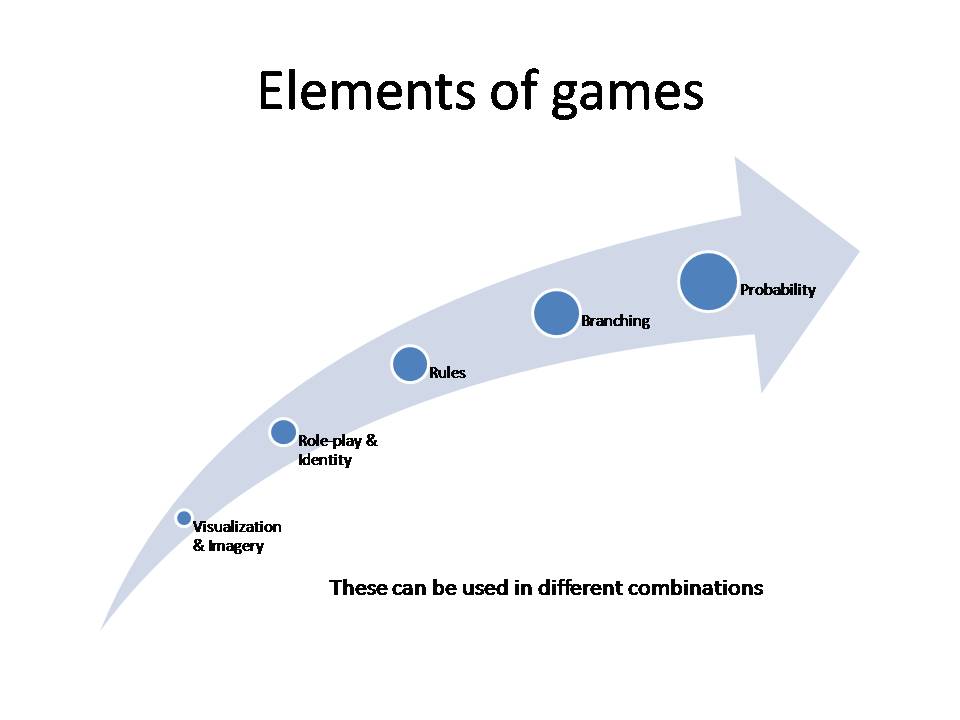 One of the big ideas from 6.0 was that kids are not naturally good at complex games. They often have the time, resources, but they do not always have the guidance of a mentor. Many kids are playing games designed by adults for adults. This is good and bad. Good in that the adult games have some complex problems and require some really deep thinking; bad in that they may just be provocative on their content without having very good game play. The point is, kids learn through play and our games are often cultural tools to transfer knowledge, develop skills, and get them ready to become adults. What we try to do as educators is pretty much the same. So why have we stepped away from using games?

Senge argues traditional organizational leaders need to “revolutionize” their management philosophy toward the highly conceptual approach of systems thinking as the basis for building learning organizations. He adds this “fifth discipline” to four others: building shared vision, mental models, team learning and personal mastery. Learning organizations are defined as “organizations where people continually expand their capacity to create the results they desire, where new and expansive patterns of thinking are nurtured, where collective aspiration is set free, and where people are continually learning how to learn together” (p.3).