From the report’s description:

So where does America stand relative to its position of five years ago when the Gathering Storm book was prepared? The unanimous view of the authors is that our nation’s outlook has worsened. The present volume, Rising Above the Gathering Storm, Revisited, explores the tipping point America now faces. Addressing America’s competitiveness challenge will require many years if not decades; however, the requisite federal funding of much of that effort is about to terminate.

Rising Above the Gathering Storm, Revisited provides a snapshot of the work of the government and the private sector in the past five years, analyzing how the original recommendations have or have not been acted upon, what consequences this may have on future competitiveness, and priorities going forward. In addition, readers will find a series of thought- and discussion-provoking factoids–many of them alarming–about the state of science and innovation in America.

The politics of American anti-intellectualism

Nothing is more political than education.

The Texas State Board of Education reminded us of the phenomenon this month, rewriting textbook guidelines to match their conservative, theological worldviews. Not since the Kansas Board of Education voted to restrict the teaching of evolution has an entire state backlashed so strongly against science and reason.

In an editorial on the board’s actions, the Houston Chronicle wrote:

In its revamp of the state’s social studies curriculum, a majority of the board has consistently voted to reshape our history. Instead of the messy, complicated past, the extremist members prefer a simple story of triumphant Christian soldiers.

From the Wall Street Journal:

As Don McLeroy, one of the leaders of the board’s conservative faction, put it in last year’s debate over evolution, “somebody’s got to stand up to experts.”

Indeed, outrage against the conspiracy of intellectuals seemed to lurk just below the surface during last week’s deliberations, breaking into the open during moments of rancor. “I see no need, frankly, to compromise with liberal professors from academia,” railed board member Terri Leo when someone challenged the move to nix the word “capitalism.” “That’s part of the problem of how we end up with distorted and liberal biased textbooks is because that’s who’s writing them.”

Are the actions of Texas and Kansas anomalies, or is there a larger movement at play? 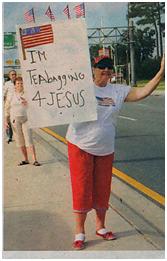 Mostly white, undereducated, and underemployed, the Tea Party movement has become the poster child for American anti-intellectualism. Whereas the group’s members fared well in the industrial era, they find themselves unable to compete in a global economy powered by ideas. Simply put, they have few new skills to offer, and nobody wants to hire them.

The world is changing around them, and they are frightened. They do not understand the changes, and they do not want to change themselves. Worse yet, they do not want to understand what is going on. We see this in the surge in popularity of radical commentators (i.e., Glenn Beck) who provide simplistic narratives of the world that often have little or no connection to reality. They redirect their fear of what they do not know or understand and transform it into anger.

In January, the conservative columnist David Brooks lamented American anti-intellectualism and the backlash against educated people:

The story is the same in foreign affairs. The educated class is internationalist, so isolationist sentiment is now at an all-time high, according to a Pew Research Center survey. The educated class believes in multilateral action, so the number of Americans who believe we should “go our own way” has risen sharply.

What will you do when anti-intellectual politics comes to your school?

In this video from The UpTake forwarded to Education Futures from Bring Me the News, President Obama speaks on the relationship between education and national competitiveness (you can skip the introductions and jump to his talk which begins around 6:20 into the video):

President Obama: “So make no mistake: Our future is on the line. The nation that out-educates us today is going to out-compete us tomorrow. To continue to cede our leadership in education is to cede our position in the world. That’s not acceptable to me and I know it’s not acceptable to any of you. And that’s why my administration has set a clear goal: to move from the middle to the top of the pack in science and math education over the next decade.”

Okay, so science and math education are important, but isn’t building a creative and innovative workforce important, too? Can we create a “race to the top” for creating meaningful innovations in education?

Dan Sutch at Futurelab (UK) alerted me to their new project, Beyond Current Horizons:

Beyond Current Horizons looks at the future of education, beyond 2025. The aim is to help our education system prepare for and respond to the challenges it faces as society and technology rapidly evolve. What skills will children need for work? How might parenting and the family change? What impact will new technologies have on learning

Of particular interest, the Beyond Current Horizons site includes a rich collection of findings, including a review of eight socio-technical change trends for the next 50 years, an overview of the futures field, and many more papers. Dan promises many more papers will be added soon that look into the future(s) of society, technology, science and the implications for education. This promises to be a great resource!

2020 skills forecast for the European Union Cedefop, the European Centre for the Development of Vocational Training, supplied a comprehensive assessment of Europe’s skills requirements up to 2020 to the European Council.  In the study, they identified six employment trends leading to the year 2020 horizon:

From these trends, Cedefop generated a set of policy implications, most notably:

Based on these findings, overall demand for skills is likely to continue to rise. For Europe to remain competitive, policy needs to ensure that the workforce can adapt to these requirements. Europe needs a strategy to satisfy the demands of the service-oriented knowledge-intensive economy. Continuing training and lifelong learning must contribute to a process that enables people to adjust their skills constantly to on-going structural labour market change.

The young generation entering the labour market in the next decade cannot fulfil all the labour market skill needs. This has implications for education and training. Lifelong learning is paramount. It requires implementing a consistent and ambitious strategy that reduces the flow of early school leavers and drop-outs, establishes a comprehensive skills plan for adults/adult learning and which increases the supply of people trained in science and technology.

Labour market and other social policy measures need to be more flexible for those needing to change their job. Alongside flexicurity measures, Europe must make proposals to maximise the employment potential of its workforce. Bringing more women into the labour market and longer working lives are crucial and unavoidable measures for Europe’s sustainable future.

How to balance work with personal and family lives? Reconciling the work-life balance in the context of social policy agenda and corporate social responsibility is a challenge for the coming years. (pp. 14-15)

[View the report in its entirity here.]

A few days ago, Minnesota Public Radio‘s Gary Eichten shared a clip of Duke’s Vivek Wadhwa, speaking about his research on the effects of globalization in the United States:

After researching the impact of globalization on U.S. competitiveness in the tech industry, Vivek Wadhwa was surprised to see his findings contradict commonly-held ideas. He recently discussed his research at the City Club of Cleveland and the policies he says are taking the U.S. in the wrong direction.

He states that we need not worry about a shortage of scientists and engineers in the U.S., despite alarms sounding off to the contrary by public policy leaders. If we provide incentives for U.S.-educated foreign nationals to remain in the country rather than requiring them to leave after they complete university studies, we can build and maintain the human capital required to remain competitive in the 21st century. For more, listen to his talk at the MPR website…

(Thanks to Carole Gupton for forwarding this item.)

The Oklahoma House of Representatives has passed a bill that says that a student can receive a passing grade in an Earth Science class if they say that the Flying Spaghetti Monster created the Earth an hour ago, and then planted false memories into every single living creature on Earth to make it seem like they’ve been around longer.

That’s right. There’s a bill in Oklahoma that will allow religious beliefs to trump education –especially science education. So you think people lived with dinosaurs? No problem! And you think the sun revolves around the Earth? No problem! According to Phil, the legislation states that “a student cannot be graded down if they say that what they are being taught interferes with their religious beliefs.”

This bill still has to pass Oklahoma’s state Senate before it becomes a law. If that happens, Oklahoma will have taken a long stride back into the Dark Ages. I’ll be honest: if I were an employer, or a University recruiter, and the bill becomes law, I would look very skeptically at any application that came to my desk from a student who graduated in Oklahoma. That makes me sad, but that is the reality Oklahoma is aiming toward

A collaborative work by Kevin Boyack, Dick Klavans and W. Bradford Paley maps the relationships among scientific paradigms through an analysis of published works in 2003. Seed Magazine has a link to a much larger JPEG (5.3MB) as well as a description of how the image was constructed. 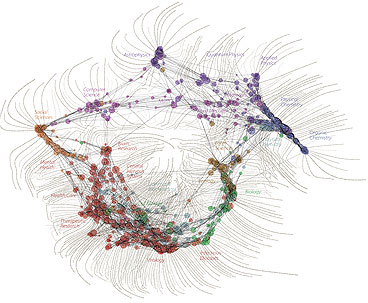 Prints of the image are also being “given away.” See Information Esthetics for more details…