Is it too late to bring creativity to schools?

An interesting conversation on creativity is emerging on the blogosphere.

The Guardian, however, posted an interview with Ken Robinson last week, getting his take on the state of education after the UK abolished much of its testing regime:

He suggests the education system needs to be not just reformed, but transformed – and urgently. In times of economic crisis, we need to think more creatively than ever, he says. “Just about everywhere, the problems are getting worse.”

The history of education has been centered on educational “reform,” but very little has ever been reformed. If we have failed at reforms for so long that education needs a radical transformation, then would it be easier for us to work outside of the education system rather than inside of it?

Other people who put their two cents in:

The 2008 State Technology Grades have been released. This State Technology Report is a joint project of Education Week and the EPE Research Center. Each state was surveyed to assess the status of K-12 educational technology across the nation in the areas of access, use, and capacity. The report assigned “grades to the states” for their technology performance overall and in those three categories. 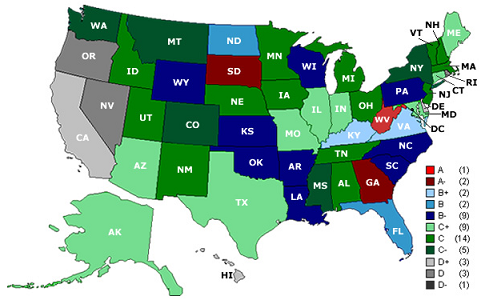 Will Richardson asks, “is anyone else a bit interested in the fact that one 21,000 student district in the UK has decided to close all of its high schools and open learning centers instead:

In the words of rock legend Alice Cooper’s most famous song, “school’s out forever”. Knowsley Council in Merseyside, which – for years – has languished near or at the bottom of exam league tables, has abolished the use of the word to describe secondary education in the borough. It is taking the dramatic step of closing all of its eleven existing secondary schools by 2009. As part of a £150m government-backed rebuilding programme, they will reopen as seven state-of-the-art, round-the-clock, learning centres with the aid of Microsoft – which has already developed links with one school in the borough, Bowring.

The schools are moving from a deficit model of learning (“students can’t do…”) to a “can do” approach that the article claims will create creative students that will be valued by future employers. Operating 24 hours a day, the centers will allow students to explore problems that interest them at their own pace, rather than steering them through inflexible curricula.

This is an important change, as Knowsley Council seems to have figured out that students can get their information from anywhere (electronically, from social interactions, etc.). What’s important is the construction of information into knowledge and the creative use of new knowledge.

Microsoft has so far struck out in its attempts to reform education. Has it finally crafted a hit? This is worth watching…

(Thanks to Scott McLeod for the tip.)