Last December, we celebrated the completion of the Knowmad Society project by launching it at Seats2Meet.com in Utrecht. Now, we are pleased to launch the website, and offer the book as a free download, a free iPhone app, or a $0.99 Amazon.com Kindle purchase.

Full details about book is available at http://www.knowmadsociety.com. 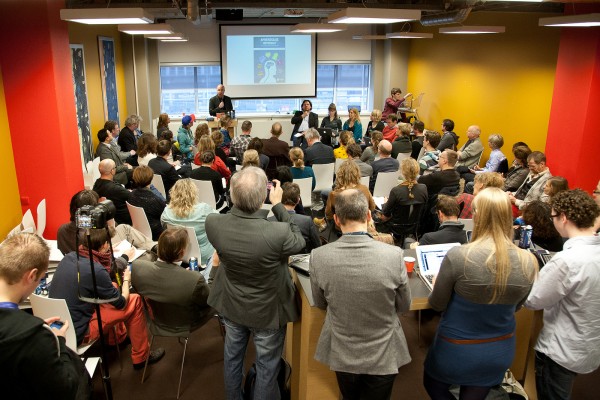 A collaboration between John Moravec, Cristóbal Cobo, Thieu Besselink, Christel Hartkamp, Pieter Spinder, Edwin de Bree, Bianca Stokman, Christine Renaud, and Ronald van den Hoff, Knowmad Society explores the future of learning, work and how we relate with each other in a world where we are now asked to design our own futures. These nine authors from three continents, ranging from academics to business leaders, share their visions for the future of learning and work, and provide insight into what they are doing now to help drive positive outcomes. Former U.S. Sen. Gary Hart provides an afterword on his take on how to best support a knowmad society in the international arena.

Knowmads are nomadic knowledge workers –creative, imaginative, and innovative people who can work with almost anybody, anytime, and anywhere. Industrial society is giving way to knowledge and innovation work. Whereas industrialization required people to settle in one place to perform a very specific role or function, the jobs associated with knowledge and information workers have become much less specific concerning task and place. Moreover, technologies allow for these new paradigm workers to work within a broader options of space, including “real,” virtual, or many blended. Knowmads can instantly reconfigure and recontextualize their work environments, and greater mobility is creating new opportunities.

The authors explore knowmad society in terms of socioeconomic evolution from industrial, information-based society to knowledge-based society, to a creative, context-driven Knowmad Society. Educational and organizational implications are explored, experiences are shared, and the book concludes with a powerful message of “what’s it going to take” for nations and cultures to succeed in Knowmad Society.

Knowmad Society is published by Education Futures LLC with additional support from Seats2Meet.com. 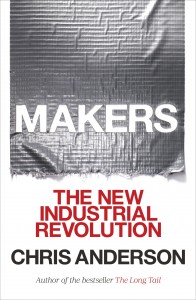 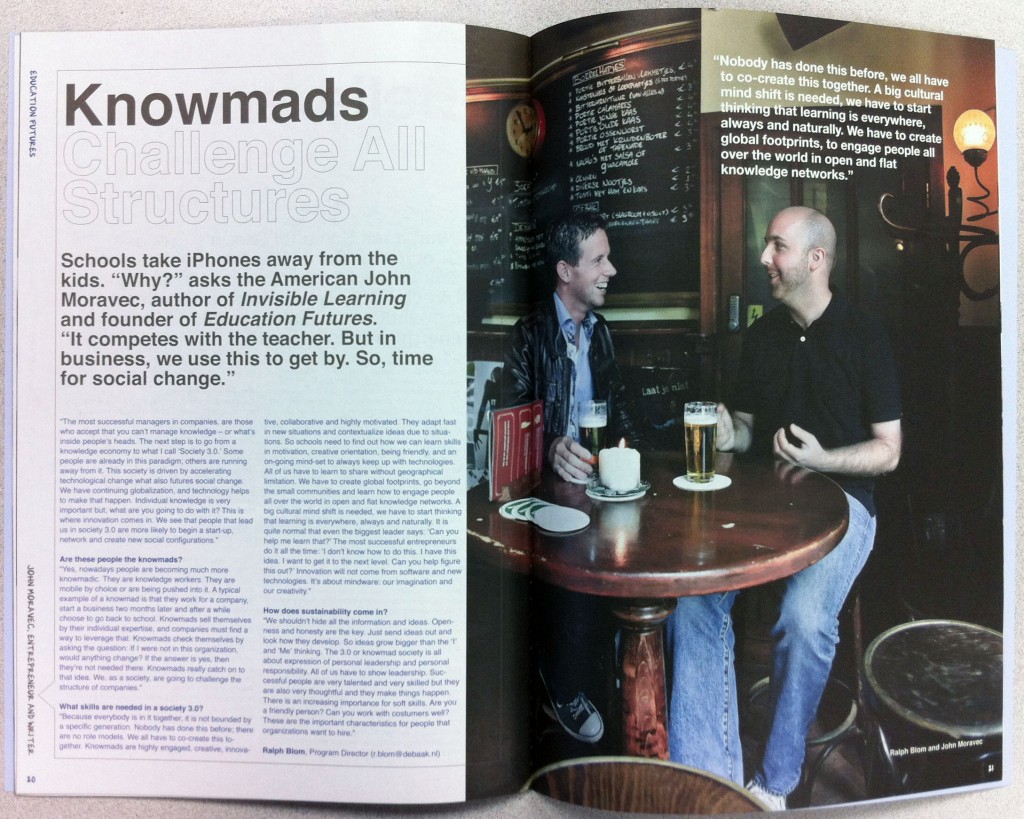 De Baak‘s Ralph Blom wrote up a short interview with me for last month’s issue of Leadership and Entrepreneurship.

What skills are needed in a society 3.0?

“Because everybody is in it together it is not bounded by a specific generation. Nobody has done this before, there are no role models. We all have to co-create this together. Knowmads are highly engaged, creative, innovative, collaborative and highly motivated. They adapt fast in new situations and contextualize ideas due to situations. So schools need to find out how we can learn skills in motivation, creative orientation, being friendly, and an ungoing mindset on always keep up with technologies. All of us have to learn to share without geographical limitation. We have to create global footprints, go beyond the small communities and learn how to engage people all over the world in open and flat knowledge networks. A big cultural mindshift is needed, we have to start thinking that learning is everywhere, always and naturally. It is quit normal that even the biggest leader says: “Can you help me learn that?”. The most successful entrepreneurs do it all the time: “I don’t know how to do this. I have this idea. I want to get it to the next level. Can you help figure this out?” Innovation will not come from software and new technologies. It’s about mindware. That is our imagination, our creativity.”

Uffe Elbæk is a social entrepreneur, politician, and cultural leader in Denmark. In his knowmadic career so far, he founded the KaosPilots school in Århus, organized the World Outgames 2009, and the Change the Game consultancy. Currently, Uffe is running for a seat in the Danish parliament as candidate from the Social Liberal Party (Radikale). Last week, we met up, and he shared his views on social entrepreneurship in the “fourth sector” (metaspace where government, private, and non-governmental organizations converge):

In the Invisible Learning project, Cristóbal Cobo and I revealed that the development of soft skills are critical for success in Knowmad Society. In an era where the useful lifespan of information and personal knowledge decreases at an exponential pace, soft skills are increasingly seen as critical to help individuals navigate and lead in a perceptively chaotic and ambiguous world. When posed with the question of which skills and competencies are critical for successful social entrepreneurship, Uffe cited four key competencies from the KaosPilots program:

Update: In September 2011, Uffe was elected to the Danish parliament. On October 3, he was appointed the Culture Minister of Denmark. Congratulations, Minister Elbæk!

Book: The Faculty Lounges: And Other Reasons Why You Won’t Get The College Education You Pay For
Author: Naomi Schaefer Riley
Publisher: Ivan R Dee (2011)

The pot of gold at the end of the tenure review process is still job security, even though powerful forces are working against the continuity of tenure as a higher education fixture. The conventional justification for tenure is dramatized through the Usual Circumstances and Suspects that prey on faculty: Budgets, administrators, unhappy students, and political, religious, or otherwise inspired off-campus harpies, such as present and former writers for the Wall Street Journal.

Naomi Riley is conventionally adequate at disparaging the academic serfdom associated with assignments to introductory classes during the tenure review process. Yes, assistant professors are often sacrificed on the altar of tuition streaming to help finance smaller classes and their ranking faculty. Yes, serfdom in the service of tuition streaming is matched by subject matter serfdom, in which entry level faculty are expected to demonstrate fealty to traditional knowledge production and delivery. And yes, undergraduates are often taught by graduate students, most of whom lust after the pot of gold.

Riley ticks off a laundry list of these and other tenure-related problems, none of which are new and nearly all of which are undocumented. Charges of shallowness are conveniently moot in her case, however, because she is neither an academic nor intellectually oriented in her writing. It goes without saying that she did not undergo the rigors of tenure evaluation. Riley appears to have acquired much of her largely intuitive opinions about higher education through contact with her parents, both academics, and by going to college. Her voice is flat; her style doggedly Wall Street Journal editorial/op-ed.

As former academic guilds speciate into “businesses”, and as business models and associated cultures virally infect otherwise healthy academic hosts, we may indeed find pressing reasons to protect faculty, not only from the Usual Circumstances and Suspects, but from colleagues who have mutated from guild members into competitive, intrapreneurial corporate personnel.

Sporting her largely unexamined defense of the virtues and inevitability of an Academic Rapture based on business values and models, Riley is an ideal flack for the Elimination of Tenure. The CEOs (aka the presidents) of more and more campuses will certainly pay her and others like her increasing heed.

Bottom line (as we say), Naomi Riley should be given kudos for a Contribution by Omission: A prominent, powerful, and evolving justification for tenure lies in the protection of faculty from shape-shifted corporate colleagues. This capability is one that should be taken up as a serious –even a top-drawer– justification for the continuation of tenure.

Matching learning to the real world: Forget the box!

I met up with Ali Hossaini in Amsterdam and Noordwijk earlier this month. In this short interview we made, Ali states that “to think out of the box, you have to start out of the box, and we’re not letting people leave it right now in the current educational institutions.” He advocates for approaches to learning that are collaborative and reflective of real world problem solving that allow people to become experts on the fly (and not just in business, but also in art, academia, etc.). The development of creative thinking, he argues, is one thing that Western educational institutions could develop as their competitive advantage.

Ali does a lot. Read his bio posted at ArtLab.