The future is getting harder to imagine

The future is getting harder to imagine –so much that the SciFi channel is giving up on science fiction and rebranding the channel. Rather than pushing for bold futures, network executives at NBC Universal have decided to retreat into the make-believe worlds fantasy, the supernatural and pro wrestling. From their media release:

By changing the name to Syfy, which remains phonetically identical, the new brand broadens perceptions and embraces a wider range of current and future imagination-based entertainment beyond just the traditional sci-fi genre, including fantasy, supernatural, paranormal, reality, mystery, action and adventure. It also positions the brand for future growth by creating an ownable trademark that can travel easily with consumers across new media and nonlinear digital platforms, new international channels and extend into new business ventures.

This change highlights a key problem: it’s getting hard to imagine the future. 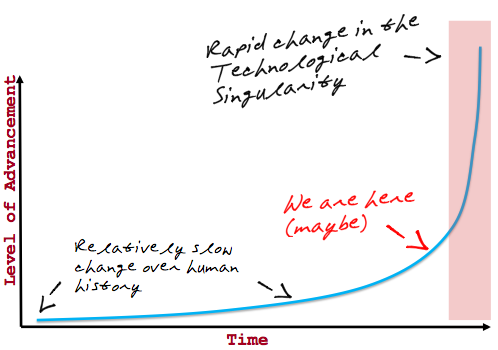 Science fiction literature of the previous two centuries predicted amazing things (i.e., artificial satellites, undersea exploration, teleconferencing) that have become common elements of our lives. This worked well when the pace of change was much slower. But, over the past few decades, the rate of social and technological change has started to take off, and the genre is grinding to a halt as people hit the limits of their imagination and foresight. The moment where change occurs so rapidly that we cannot imagine what will happen next is the Technological Singularity.

Perhaps SciFi’s move away from science fiction is a sign the Singularity is nearer than we think?