One probabilistic computer per child 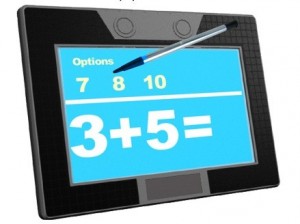 OLPC may see a new competitor enter the market. Utilizing a new microprocessor technology that embraces probabilistic logic computing rather than traditional boolean logic computing, a team at Rice University is designing a digital, touchscreen, LED slate for deployment in developing countries. Probabilistic computing permits devices to provide correct answers most of the time rather than all of the time, allowing for dramatic reductions in power consumption while speeding-up computations considerably. The reduced chip-based power consumption will allow the device to powered by solar cells.

What it is: The “I-Slate,” a solar-powered, stylus-controlled classroom aid unveiled at the IEEE’s 125th Anniversary event on Tuesday. The idea is that this LED slate will replace the chalk slates still used in much of the world, allowing students to learn basic math skills without the need for a literate teacher (something that is in demand in much of the world). The device is being created by Dr. Krishna Palem and his team at Rice University.

The slate will be able to download coursework using wireless networks. And because these chips should be far cheaper to produce than the high-powered processors found in most new products, making them practical for the third world.

Inspired by microfinance, the I-slate’s innovators intend to use social entrepreneurism to create a self-sustaining economic model for the I-slate that both creates jobs in impoverished areas and ensures the I-slate’s continued success regardless of ongoing philanthropic support.

The first prototype PCMOS chips were found to use 30 times less electricity while running seven times faster than today’s best technology. Palem’s PCMOS team includes researchers at Rice and at the Institute for Sustainable Nanoelectronics at Nanyang Technological University in Singapore, where the first PCMOS prototypes were manufactured last year.

No burger flippers left behind