SimCity Societies, the latest release in the 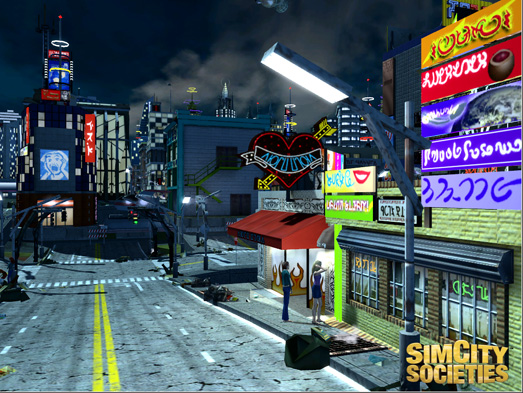 SimCity Societies, the latest release in the SimCity franchise, is due for release on November 13. The game integrates a social and cultural modeling component. Characteristics of each user-run SimCity is determined by the user through development of six social, cultural, and economic factors: productivity, prosperity, creativity, spirituality, authority, and knowledge.

Featuring an all-new, revolutionary feature set, SimCity Societies allows you to create your own kinds of cities and shape their cultures and environments. Make your cities green or polluted, contemporary or futuristic, rural or urban. Create an artistic society or a police state, an industrial city or a spiritual community—or any society you want!

Jamais Cascio notes that the game is finding real world applications, including climate education –from an unlikely source:

British Petroleum initially approached EA Games about a specialized version of SimCity that dealt with energy and global warming; rather than undertake a one-off project, EA agreed to partner up with BP to integrate these ideas into SimCity Societies. While this has elements of crass product placement — all of the gas stations in your city are BP, for example — it also suggest an intriguing opportunity to look at not just how energy and environment affect economic results, but how they change social behaviors, too.