This has been a quiet blogging week

This has been a quiet blogging week due to FLACSO México‘s visit to the University of Minnesota. The visit has been very busy, and highly productive.

This morning, Education Futures contributor Dr. Cristóbal Cobo (read his blog) presented his ideas at a University of Minnesota’s Institute for New Media Studies and Digital Technology Center research breakfast on his new book, Planet Web 2.0: Collective Intelligence or Fast Food Media (English translation). The event was also webcast by the University’s Supercomputing Institute. (A link to the recorded video will be posted when it becomes available.) 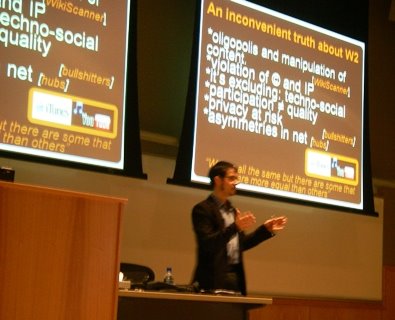 A debate followed the presentation on the roles and values of online technologies. Most puzzling for academicians in the audience was how might reconcile the need for producing peer-reviewed, “academic” publications with freely available, open material. Whereas a journal article might solicit a handful of readers, an open document might bring in thousands more (for example, Planet 2.0, which was issued under a Creative Commons license, has already registered over 61,000 downloads in the first few weeks since its release). Our promotion and tenure process, however, recognizes only publications that appear in traditional print media. Why?

At the end of the event, Dr. Cobo was approached regarding an open sourced effort toward translating the book from Spanish to English by the Department of Spanish and Portuguese Studies. Planeta 2.0 approaches…!