An element missing from media coverage of

An element missing from media coverage of the One Laptop per Child XO is the ramifications of using mesh networking. This scheme allows for data to be passed through individual machines acting as nodes, where data hops from machine-to-machine until its destination on the network –or on a foreign network is reached. This allows for instantly reconfigurable and self-healing networks that can self-adapt to a variety of network accessibility environments. 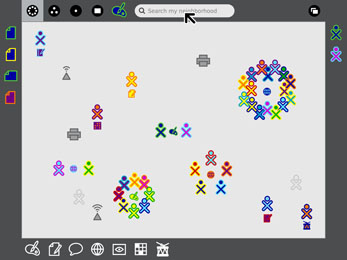 This networking model has also been recontextualized into the interface and software design of the device which encourages as much co-teaching and co-learning as possible. Working with teams from Pentagram Design and Red Hat, OLPC created SUGAR, a graphic user interface that captures the students’ world of fellow learners and teachers as collaborators, emphasizing connectivity between people and activities. From OLPC:

Everyone has the potential for being both a learner and a teacher. We have chosen to put collaboration at the core of the user experience in order to realize this potential. The presence of other members of the learning community will encourage children to take responsibility for others’ learning as well as their own. The exchange of ideas amongst peers can both make the learning process more engaging and stimulate critical thinking skills. We hope to encourage these types of social interaction with the laptops.

As most software developers would agree, the best way to learn how to write a program is to write one, or perhaps teach someone else how to do so; studying the syntax of the language might be useful, but it doesn’t teach one how to code. We hope to apply this principle of “learn through doing” to all types of creation, e.g., we emphasize composing music over downloading music. We also encourage the children to engage in the process of collaborative critique of their expressions and to iterate upon this expression as well.

While the developed world is using new technologies to teach the same old stuff its been pushing since the 19th century, the co-constructivism allowed by OLPC could allow children in less developed countries leapfrog their peers in new knowledge production. Is this purposeful orientation toward the use of technologies the start of a new revolution in education?