I sent an email out to a

I sent an email out to a few folks with a short question:

Which trend will have the greatest impact on education in the 21st century?

The results will be posted below as I receive them. If you did not receive an invitation, but would like to participate, please email me at moravec@umn.edu with your response.

I will update this response summary over the next couple evenings: 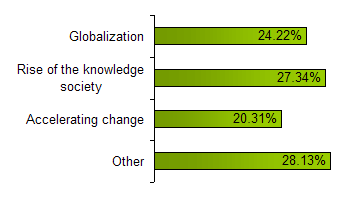 (64 responses recorded as of last update)

Your choices are framed in the analytical tradition. Being systems thinker myself, I can only say that it is all four, the fourth being reactions and resulting conflicts against the other three trends.

I think they all will have an impact, but globalization will have the largest impact. As employers try to cut costs, they will rely more on the free technologies afforded by the internet. The use of Web 2.0 and virtual worlds are cost effective and efficient.

I would say “other” because my answer is more specific than “accelerating change.” I think it will be an acceleration of the digital society in the ways digital media are incorporated into the education process.

I offer this challenging thought:
Understanding that currently many individuals have the capabilities of a major broadcast company of the past. What and how do we want to do to teach and learn in this environment? “Education” is not seen as leading in this area, is slow to see it, slow to understand it, slow to adopt it. Will Education as we currently know it even survive the move in to a future where access to information anytime, anywhere, moves education out of the classroom. When a student can research a project, make a video, post it on YouTube, and have it viewed by thousands of people, in the time it takes their teacher to write up an assignment, have it mimeographed, and hand it out to a bored classroom….what is the viability of current forms of education?

sorry, pretty cynical, but i believe it to be true. It is the greatest hurdle we face.

Currently foreclosures on homes are up 40%, and in low income, esp. African American communities. Detroit and areas of Ohio and Indiana are in really bad shape.

The wealthy are increasingly becoming wealthier through overseas labor and new markets. In the mean time, our labor force for highly skilled work is being reallocated overseas where it is cheaper, and workers have advanced degrees.

One of the reasons I answered as I did is that I did not know what you meant by the terms you introduced.

I think there are lots of interconnections here, so that any answer says as much about that individual’s knowledge base and personal concern, as it may about any “objective” reply.

Accelerated change is a result of globalization, which in turn is pushing the rise of the knowledge society, for instance.

But what might be the trend with the greatest impact on education in the 21st century?

I think it’s the rise of 3D Immersive User-created Worlds. These are, for the first time in history, providing affordable access to a 1st person experience, like that which apprenticeships, field trips, science labs, and other effective pedagogies have striven for. We’ve instead relied upon “3rd Person experience” – getting the narrative through someone else, in the form of language or movie. This will probably break our centuries-old paradigm of how to structure learning.

I would have to say the rise of the knowledge society will have the greatest impact simply because it moves education away from hard skills to soft skills. It is not the ability to do one thing, it is the ability to quickly learn new things and transfer knowledge.

The media has promoted globalization as the trend du jour, and I am inclined to choose this one as a metaphor for what needs to happen in education right now.

I think the knowledge society is already here, as well as accelerating change, both brought about by the rise of easily accessible public internet in the early 90’s. These were big trends but didn’t change education all that much. . . not sure globalization will either!

If I had to choose a different theme, it would have to be something about the gap between what is taught in school and what one needs for life after compulsory schooling is over.

I believe the greatest impact on education in the 21st century will be a combination of increased networking and bandwidth across the US and other countries…this will impact everything else.
Bandwidth in the 21st century is very similar to other forms of communication in the past, thus the increase in communicative capabilities will change everything we do…visual communication, tactile and others will all be affected by more bandwidth.

Educational and political responses to shifts in workplace demands, accompanied and facilitated by inconceivable digital technology developments, are going to make this century quite an interesting ride!

I think the rise of knowledge society will have the biggest impact. People are going to need more learning skills, not content acquisition. This means collaboration, creativity, etc. This will be driven by globalization. The leaders will have to manage change more effectively but I think knowledge society is the main driver.

Howdy! The greatest change of the choices offered is “The Rise of the Knowledge Society.” Globalization also goes hand in hand with that rise, so, it’s difficult to imagine one without the other. When you suggest accelerating change, I assume you’re referring to technological change. Again, without technology, no “rise” would take place. So…i suppose that the rise of the knowledge society will be all-encompassing of globalization and technology.

The core of education in our evolving societies will be founded (i believe) is the increasing amount and access to knoweldge and information. which at certain point empoweres accelerated changed and im not sure if its the same for Globalization…

Other: Lack of funding to prepare our students for A,B,C

The reason I picked accelerating change is that you asked about impact. Impact is usually measured by the personal changes that have to take place. Major changes have to take place in teaching and learning if our students are going to be prepared for a global economy and the rise in knowledge based society. Students will have to use different tools and teachers will have to plan for “impactful” learning experiences. Change will also bring about the most controversy with teachers ( we know this first hand) and it will bring about the greatest increase in student learning.

[ X] Other: all of the above, the ability to be agile in reinventing systems and adept at sorting thru chaos in order to do so.

It is difficult to look at these three areas and single out one as having the greatest impact on education in the 21st century. I believe they are all interdependent and are contributing to the impact we are and will continue to experience. That said, I am selecting globalization. As a world, it will be increasingly important that we understand the influence and impact of this phenomena. Hopefully, advancing technologies and a rise in a knowledge society will assist in our understanding of what it is to be a ‘world citizen’.

If we’re talking P-12, my answer is “Rise of the knowledge society.” Higher ed is a different question. For Higher ed, I’ll say, “Globalization.”

Choosing only one was difficult, but I selected accelerating change because it is the most general of the three. Education historically has changed slowly, so this rapid change poses I think the biggest impact.

[ x ] Other: increasing differences between the social classes,
(especially effecting people of color from all nations) and the perspectives of the privileged about poverty

This is a tough one; any one of these will significantly push and affect the others which precluded my stating one as most significant. What I would suggest is that it’s not one of these that significantly impacting the others, instead its that these 4 are mixing together is such a dynamic and new form that out of this mixture is a new cocktail (odd metaphore). What we have to do is to understand that there is a new and distinct model that really hasn’t been named, acknowledged or even understood clearly.

I think the Rise of the knowledge society will change how teaching and learning occur.

I think the structures of education (private/public; vocational-technical; degree vs. certificate, etc) will be strongly impacted by globalization.

These are MUCH too large to weigh. Something like ‘which has the greatest impact on nutrition, the fork or spoon?’

My answer: “All of the above.”

[ x ] Other: the transformation from the information to the education age

This question has really caused me pause…Here is my best attempt at the moment, having just come home from living abroad for several months:

Globalization, on the other hand, I think is too broad and includes so many facets: knowledge production, capitalism, culture/clash of or homogenization or something in between, to name a few.

This leads me to believe that accelerating change may be the most critical factor….with the caveat that the acceleration of change is a given, but how we embrace, “manage,” and adapt to this change will have the greatest impact. Whether for good or ill, the impact may either widen the gaps that globalization and the rise of the knowledge society could produce, or it could draw in and create a much broader network of participants who create and design the 21st Century…and beyond.So in some regard, it’s not even the acceleration of change that is the impact, but the response to accelerating change.

[ x ] Other: an increasingly dysfunctional cost/price model of higher education

I’m going to respond with an assumption that you are speaking of public education? If so, I think the greatest impact would come from individuals being knowledgeable about what they want and need in education and pushing for a change in the way those needs are met.

I think that accelerating change will have the greatest impact on education. Right now I think the goal of education is to give students career skills, but we will have a lot of catching up to do as new jobs develop and others fade away.

Accelerating change is the one that comes to mind first, but not in the way that Pink or Friedman mean. Instead, it’ll be at the macro level of kids/parents trying to wrestle choices.

Customization is the real impact coming towards education, which may or may not be fueled by all the rest.

Games in the Classroom Part 4